If Mohammed won't come to knit night, then knit night must come toMohammed

In 2007, keen to make some friends in my area and wanting to share my growing knitting habit with other like minds, I joined the Westender Stitch 'n' Bitch. Thankfully the bitching part is really directed at political figures, writers, television programmes, films and whatever else is the big issue oft day, and I have met a fantastic bunch of people over the last 4 and a bit years, some of whom I count amongst my closest friends. The last Sunday of the month is permanently booked out and very little will keep me from attending (birth of daughter being a rare exception).

Somehow or other when the girl who originally set up the group couldn't continue, I ended up organising the group and, with a close friend from the group, set up a second meeting, this time a weekly pub fixture. Wednesday night knitting was a fiercely guarded diary fixture. I would work late every other night of the week if it meant I could get out on time to be there.

It probably sounds silly to non-knitters or, at least, to those who don't have hobbies that they enjoy sharing with fellow enthusiasts, but the loss of my weekly Wednesday knitting sessions with the girls has been one of the hardest parts about adjusting to life as a mum. For the 18 months before Baby Bird arrived, I had gathered up my latest work, taken it to the pub, enjoyed a glass of wine (or once pregnant, a sensible fruit juice) and shared something of myself with a disparate group of people bound together at first by nothing more than sticks and string. It is so much fun. I always learn something new about my craft, I enjoy celebrating the growing accomplishments of each member, and I have made some really good friends. It is therefore hard that Hubby's working hours often keep me away from knit night.

So when my good friend, J, suggested I combat the gloom of Hubby's Year End (for non-accountants, this is the annual misery of finalising the previous Year's accounts and involves said husband disappearing into a
black hole, also known as Aldgate East, only to be seen at weekends if I'm lucky) by bringing knit night to me, I jumped at the chance. What a fabulous evening.

Six of my favourite knitters, plus a very lovely new girl who has joined in the last couple of months, piled into my living room this Wednesday. Cake, tea and wine were consumed, jumpers, cardigans, hats, baby bonnets and booties were made and I laughed more than I had in ages. J worked on an adorable purple sweater for a baby whose name she refuses to pronounce (long story) while regaling us with the (equally long) list of famous people she can't stand (Caitlin Moran and Professor Brian Cox featuring prominently but by no means alone). M made baby clothes (the only thing I have ever seen her make in the 18 months I have known her and always impeccably worked to the same pattern!). E completed the fronts of her very first cardigan and promised us authentic Japanese cooking lessons. G debated what to make next while P patiently cranked out a baby sweater in tiny yarn on tiny needles and C worked on a pretty little bonnet for the pretty little baby one of our other members has recently produced and entertained us with tales of life in rural Ireland in the sixties.

What was I up to during all this? I was serving up this coffee and walnut cake. 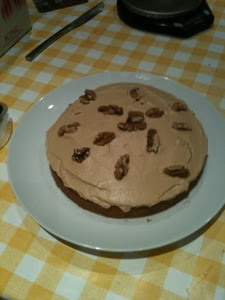 It admittedly needed more walnuts, but being uncertain if everyone liked them, I had left enough space to cut walnut-less slices if necessary. Very little was left by the end and I will be covering liberally with walnuts next time. I was boring (I mean "entertaining") my friends with Baby Bird's most amusing antics. But mostly, I was working on this: 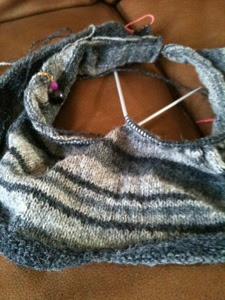 my Urban Fern. The original pattern is the lovely Fern by Ann Shayne, on half of the highly entertaining Mason-Dixon Knitters. 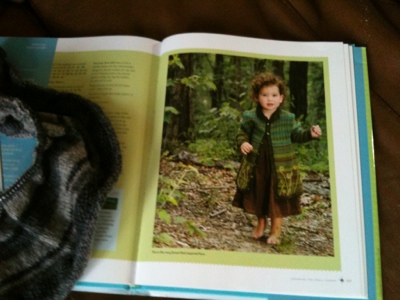 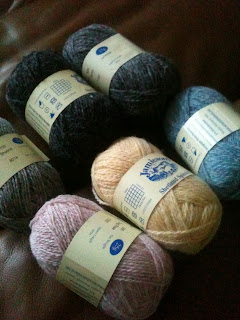 In Knitting Between the Lines, she explains that she was inspired by the woods near her home, choosing the colours and striping pattern to mimic and reflect the forest from floor to canopy, and embroidering it with the fiddlehead ferns that she sees throughout the area. This got me thinking. We don't have much in the way of fiddlehead ferns in Ealing and I liked the idea of creating a cardigan the was inspired by the landscape the surrounds us. So, I have chosen a series of greys to mimic the urban/suburban landscape, and will be adding in the bodice a lovely collection of pink, yellow and sky blue to represent the sunsets we so often see from our study window. The embroidery will be a jaunty cartoon skyline (assuming I can overcome my fear of screwing up the cardigan by adding my novice sewing). I have been sketching away for a few weeks and think the design is coming together. The yarn is the very lovely Jamieson's Shetland Spindrift. I hadn't used this before but I am pleased to discover it is not nearly as scratchy as I feared and is knitting up surprisingly quickly given how fine it is and how small the needles are (3.25mm). I am delighted with how the stripes as blending and how dense the yarn's halo makes the very fine fabric appear. 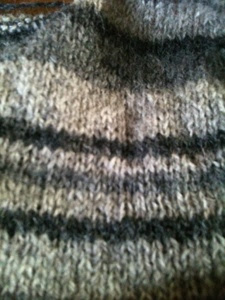 Hopefully, once work calms down for Hubby, I will get out to knit night a bit more. In the meantime, I am very grateful to my yarnie friends for foregoing the pub and bringing knit night to me.
Posted by Lyn Collett at 21:06