One nap at a time

I have been promising myself for years now that I will start sewing more seriously and really get to grips with it. The same obstacle always seems to get in my way: time.  However, since talking to my friend Carie about how she fits in so much sewing and other crafting around a very demanding job and a (I'm sure equally if not more demanding) feisty toddler, I have decide that this is really an excuse and not something I should let get in my way any longer.  Carie introduced me to the idea of what she called cumulative sewing, i.e. you do a bit here and a bit there and trust that, if you do that regularly enough, finished items will result.

I tend to leave sewing until the weekends, on the grounds that daylight is better to work in and the evenings are still too dark, and that I can then get an extended period without childcare responsibilities so that I can really get stuck into something.  This is partly because I need to set up my sewing machine and all my other bits and bobs as I don't currently have a permanent home for them, and partly because I have always thought it wasn't worth doing just a little bit here and there and that I would spend more time figuring out what I was up to than I would doing anything.  However, our weekends are busy affairs and, while some me-time is very much on the weekend agenda, there's always a million and one things I would like to do with that me-time, and a million and one family things I would like to do to (as well as the slightly more humdrum but necessary household activities that are also more easily accomplished at the weekend).  This all-or-nothing approach to sewing hasn't really resulted in much activity and means that I am still more likely to pick up my knitting needles than my sewing needles, despite loads of ideas and a fair few pattern books and piles of fabric.

After my little splurge at the start of the year, I'm having a re-think.  Baby Bird takes a fairly consistent mid-day nap now, which usually gives me a clear hour to focus on something (with time for some household faffing either side).  So, last week and this week I have indulged myself and one nap each week has been a sewing nap.  I'm pretty pleased with the results. It turns out that one nap-time is long enough to plan, trace/transfer and cut a garment for a little person who wont stop growing and needs a dress for a wedding at the end of the month.  It also turns out that, with a bit of careful planning, you can get two dresses for a small person out of one 76cm remnant, a fat quarter and some scraps, meaning both dresses combined will have cost around £10.  You have to love small people. 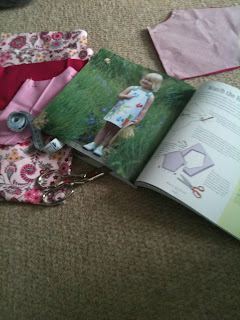 Two nap-times in, and I have two piles of neatly cut pieces awaiting sewing and I've pinned the simpler dress together ready for tacking and fitting (...well, sticking it on her quickly to make sure it isn't too small before I even start - I don't propose to be more precise than that at this age!).  I think sewing the simpler one will take two nap-times (mostly because I've never applied bias binding before and I also need to learn how to make buttonholes) and the other one will probably be two or three.  Either way, I'm pretty hopeful that there will be two new frocks in Baby Bird's wardrobe by the end of March.  That's one more than made it into her wardrobe in the whole of the previous year, so not a bad effort in my book.

Next challenge on the sewing front: unearthing the spare room and office from the huge piles of junk that currently inhabit them so that I can set up a permanent sewing corner.  Then there will be no stopping me!
Posted by Lyn Collett at 20:35