Well, in news that will have surprised noone but me, January 2013, just 6 weeks before I was due to have a baby, was not the best time to start a new blogging project, or a new project of any kind. So I mostly watched the very beautiful 52 Project from the sidelines.  However, I did take a lot of pictures and could, if I could find the time, certainly put together 52 photos of my lovely daughter transforming from tiny toddler into terrifyingly grown-up little girl and 46 photos of my adorable squishy pudding of a baby transforming from a tightly curled newborn into a crawling tornado of laughing destruction.

I still love the idea of this project and had a tremendous amount of fun tracking my friend Julia's highly successful efforts. She is an example to me in many ways, not least in persistence, commitment and cramming more than you think possible into each day.

So, I'm going to have another go.  And here is week 1.  A bit of a cheat probably because it is actually a series, but it turns out bubbles are hard to photograph, particularly with only an iPhone when it is only just getting light outside, and I also felt the series told the story more effectively than any single image. 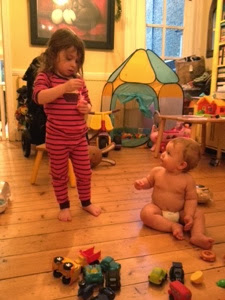 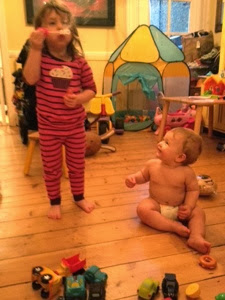 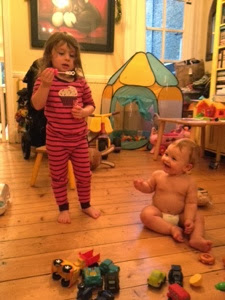 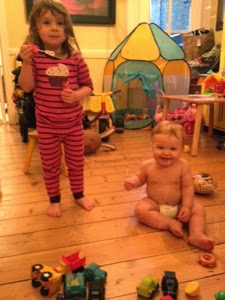 The anticipation, the movement, the look of "my sister is the funniest person on the planet". It all made this a perfect moment, occurring a little too early on the only Saturday morning of the year when my husband has to work at the office.  It's the main reason I was taking the pictures - because he misses out on many of these moments and it's nice to share our day when he returns home.

In a bit of shameless recycling, I'm also using this as my {this moment} for the week too. Late as well.  Tsk, tsk.  I know, must try harder.  Let's just focus on the fact that I've actually blogged something!
Posted by Lyn Collett at 22:39

Email ThisBlogThis!Share to TwitterShare to FacebookShare to Pinterest
Labels: {this moment}, 52project, kids