Gosh, where does the time go.  I have half a dozen half-written blog posts but nothing to show you.  I'm also a little behind with the lovely portrait project but as that is the st easily fixed, I thought I'd tackle that first.

So, 3/52 - there was really only one story in our household in the third week of the year: SNOW!  Such a comparative rarity in London and the first time Babybird has really been old enough to find it exciting.  She loved playing out.  In fact the only way to get her back in was to pull out the paints (her current favourite indoor activity). 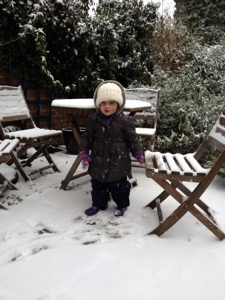 4/52 was one of those magical moments when your child surprises you by playing a new game with no apparent prompting from you.  She suddenly appeared while I was tidying the kitchen after breakfast and announced "Look Mummy, I'm a princess!".  How can your heart not melt? 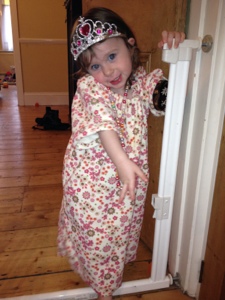 Oh, and there will be more on the crazy nightdress as soon as I sort out my pictures.
Posted by Lyn Collett at 08:53