We had a bad week.  Not an earth-shattering, awful things happening kind of a week.  Just a nothing ealing quite right, everything proving harder than it ought, everyone being grumpy, out of sorts and difficult kind of a week.  Every day was a grind.  Every day involved difficult behaviour from one or both kids.  Every day demanded more of everything than I actually had to offer.  Every day was shoutier than I hoped and by the weekend we were all pretty miserable.  No amount of DVDs and cuddles, or walks in the park, or biscuit baking, seemed able to improve things.

And, while I'm sure there must have been good moments (because, as I say, nothing objectively awful happened last week and there's always fun moments to lighten the gloom), I can't for the life of me remember what they were and, I discovered when I reviewed my phone for pictures for the 52 project, I didn't photograph any of them.

So this week's contribution will win no prizes at all.  It is, in fact, the only photos I took last week.  I toyed with taking some pictures on Monday when I was having a much better day and when I realised that I hadn't got any decent pics from last week (after all, only I know when they were taken) but that wouldn't be honest and wouldn't be in the spirit of the game.  Plus, I rather think there is a lesson here.

So, we have Mr Man sitting in a tricycle at playgroup (he looks a little uncertain but it is mostly because I stopped pushing him to take the pic and so he is shouting at me to carry on) 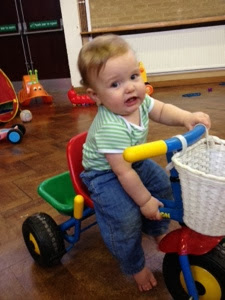 And Baby Bird at the top of a very large slide designed for far older children than her but that she scales with the ease of a monkey. 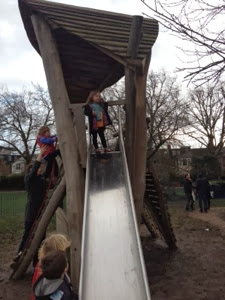