After the previous week was so awful, I made a conscious effort to regroup last week.  I tried hard to be gentler, particularly with Birdie ("I'm not a baby, Mama, I'm a big girl"), but also with myself.  I made an effort to have more fun with the kids, to try to connect with them, and to listen more to what Birdie was saying with her behaviour as well as with her words.

We did a bunch of stuff, mostly at home due to the truly vile weather but we also managed a couple of lovely, mostly sunny, days out in the fresh air which I think helped all of us to feel better.  I won't pretend it was all fun and larks but it was definitely an improvement and it showed when I came to choose snaps for the 52 project. I had loads of each kid and a fair few of the two of them having fun together.  It was pretty hard to choose.

In the end, it had to be Bathtime Baby 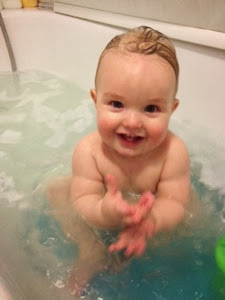 and Bouncing Birdie (apologies for the quality of this one, it's really hard to take a clear shot of a small girl on a bouncy castle on an iPhone, but I chose it for the energy in the picture and the happiness on her face rather than the quality of the picture; also, yes, that is a Hallowe'en costume she is wearing at a friend's February birthday party...) 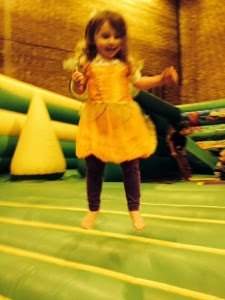