Six weeks in to the 52 project, and I'm really enjoying it.  It's reminding me to document what we're doing; I'm starting to think more about the pictures I take when I do it (although I don't think that shows yet) and I find looking at all the other wonderful pictures being shared very inspiring. I love looking at the craft in the photographs and also find the activities depicted are often a source of inspiration for what we can do as well.

I don't normally struggle for a pic of the boy - narrowing down the choice is normally the hard part, and there's usually two or three standout pics to choose from (well, standout by my lowly snapper standards, nothing troubling David Bailey, obviously). This week however offered pretty slim pickings.  Mr Man caught a nasty tummy bug in the middle of the week and was poorly for the rest of the week.  He looked actually green on Wednesday night and then looked pale and off-colour, acquiring a strange bluish tinge around the eyes and nose.  Not good.  He also wasn't really doing much other than having cuddles and feeling sorry for himself.  Understandably so, but they didn't really feel like moments i wanted to capture "on film" (you know what I mean, I'm from the dark ages, all photos are "film" to me, even though I haven't used a film camera for almost ten years).

So, when I came to review the pics from last week, there was only one set of pics of Mr Man and only one pic within that set worth sharing. Here he is looking pale but due to the wonderful skin-enhancing effects of smothering your face in yoghurt: 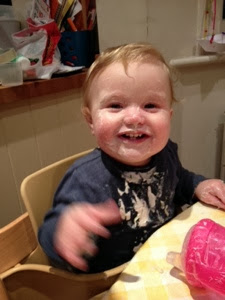 Birdie in the other hand was much easier this week.  I'd got some great shots of her playing at home and out and about, but there was really only one shot to sum up my fearless little warrior last week: 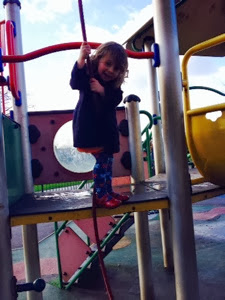 Much to her dad's concern/upset, we spent Friday afternoon in the park learning how to climb down the rope. He is not a fan, particularly of how far away I stand while she's doing it.  I say she needs to learn this stuff and she needs to learn how to do it safely. I'm also hoping that getting to climb all over the place in the park will burn off some energy and reduce her almost obsessive need to climb on all the furniture at home.  Well, I can dream can't I?
Posted by Lyn Collett at 19:30