Yesterday was anything but ordinary.  Yesterday was Mr Man's first birthday!  I cannot believe how quickly the last year has gone, or how quickly they change and leave their newborn days behind them.  He looks more and more like a little boy now and Hubby keeps making ominous remarks about a haircut.  The words "Over my dead...." may have been muttered darkly in response.

We had a lovely time yesterday, opening presents from Mummy, Daddy and Birdie; singing "Happy Birthday" at every possible opportunity; taking the new tricycle to the park; eating cake; and having chips at the pub for tea. Mummy and Daddy even finished the day toasting our beautiful boy with a glass or two of champagne after the kids were safely tucked up in bed.

It was a wonderful, exciting and happy day and I have tons of photos that I could share.  However, none of them were "ordinary" moments in the sense I'm trying to capture.  They were special and worth capturing but I'd rather share pictures of the kids "just being". I won't struggle to remember Mr Man's first birthday, whether I blog about it or not as the landmark events stay fairly clear. But the day after, when my daughter announced that she couldn't wear clothes because she was a mermaid (a mermaid who, the eagle-eyed amongst you will note, can wear shoes), when she tried to take off her brother's pyjamas ("because he wants to get dressed and I'm helping him") and when she carefully arranged everyone so that they could watch Mike the Knight together (apparently inflatable rabbits are big fans) before trying to get her brother to compete in a hopping race on the rabbits even though he can't yet walk. 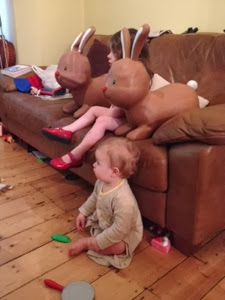 That's the kind of day I need to capture for the Ordinary Moments. That's the kind of crazy but totally normal if you're a toddler day that I need to capture because, for all it feels like some kind it belongs in some kind of parallel universe, it is in fact a regular and entirely average day in my world right now.  As such, there will be hundreds more like them and they will all blur and fade.  In fact, often, by the end of the week, I'm talking to someone and I start a story with "Birdie did the most hilarious thing the other day.  She was... What was she doing?  She was...  Well, she said....  Oh, I don't remember... But it was very funny" before looking awkardly at the table and wondering whether I can have more coffee.

So, my lovely little man's birthday is not the moment I'm recording this week. The day after however, could not have been more ordinary if it had tried.
Posted by Lyn Collett at 20:22

Email ThisBlogThis!Share to TwitterShare to FacebookShare to Pinterest
Labels: {the ordinary moments}, kids