But it involved anything but lazing.  Hubby and I have always been fond of getting out for a walk on a sunny afternoon, especially a cold wintry one. In fact, it doesn't even need to be sunny so I suppose in some ways we were made to have kids - we head out and about in all but the wettest of weather and are big believers in the mantra "There's no such thing as bad weather, just inappropriate clothing choices".  So, it isn't really that much of a hardship (or a surprise) that our firstborn is a hardy soul who seems happiest outside.

This Sunday was brisk but sunny so we bundled up and headed out after lunch. 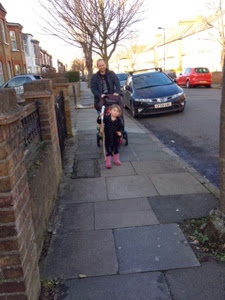 The stick had already been gathered on a previous excursion and transformed into a "magic staff" so this is actually how we departed the house rather than how we returned.  We didn't go far, just to the park about a mile down the road, but it was a journey that necessitated much "checking your map, Mama", involved us being chased by Tick Tock Croc and included an interesting conversation about who we like best: "Daddy or mermaids". Quite an expedition, even by Birdie's creative standards.

The playground we went to is probably Birdie's favourite of the local parks and is certainly my husband's favourite. It has a good mix of stuff for climbing, allowing our little monkey to really get stuck in, and traditional playground equipment, with plenty of things the little man can try out too.  We had a blast. Swings were swung on, ropes were climbed, fireman's poles were slid down, logs were balanced on, the great big treehouse thing was scaled again and again in ever more ingenious and hair-raising ways, and most magically of all, my children played together. 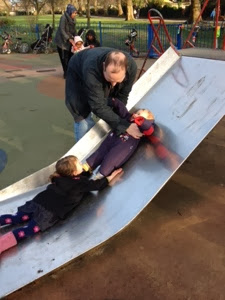 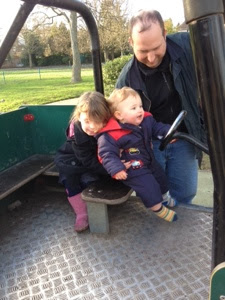 There was nothing fancy or unusual about our afternoon.  It was exceptionally ordinary. Precisely why I want to remember it.  Four people enjoying each other's company and a (currently all-to-rare) sunny afternoon. It also feels like it marks the end of a chapter; the start of Mr Man's shift from babyhood to toddlerhood; from sitting in the buggy watching to being in the thick of it; from laughing at his sister spinning like a crazy thing to being the crazy thing doing the spinning.  I still have plenty of times and places where he is my baby, but the park is, most definitely, not one of them any more. 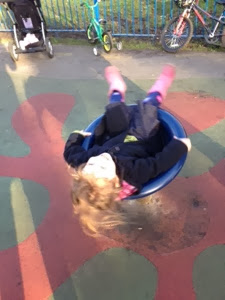 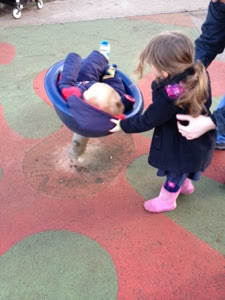 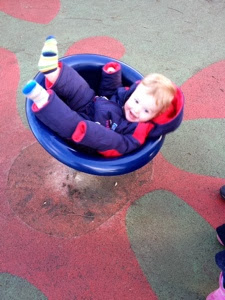 Email ThisBlogThis!Share to TwitterShare to FacebookShare to Pinterest
Labels: {the ordinary moments}, kids