Oops, what happened there?  I fell into a bit of a black hole on the blogging front.  Just not enough energy left over at the end of the day string together my thoughts (and yes, I do actually try to make this stuff coherent, despite all appearances to the contrary!).  A couple of weeks slipped by without me even noticing.

Week 8 - a.k.a the week of the big birthday party 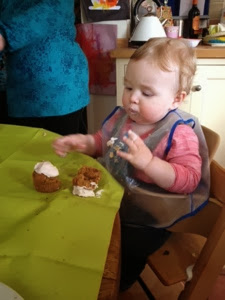 and here is the birthday boy enjoying his cake. That is actually a carrot cupcake with cream cheese frosting from the rather lovely Cooking for Baby by Lisa Barnes. 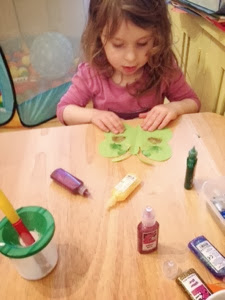 It's a little tricky to find this book sometimes but well worth it.  There's lots of recipes that translate really well to adult food and Lisa adds more flavour to her dishes than the ubiquitous Annabel Karmel.  Also, being an American book it offers a slightly different range of veg and grains than you might find in other books, encouraging you to branch out a bit more.  The cakes in the final chapter are all delicious and the carrot cupcakes and cranberry and orange scones both make regular appearances in our kitchen. The full birthday party menu will hopefully feature in its own post along with some snaps later in the week.
Birdie meanwhile spent a lot of that week making Splatterflies - more on those later.

Week 9
I don't remember much of what we got up to that week, save that the week culminated with Hubby's birthday.  This involved a Friday night pre-bathtime present wrapping frenzy that saw the boy wrapped up in large amounts of wrapping paper and slightly more sticky tape than is ideal by his very enthusiastic sister, a lengthy search to find where Birdie had hidden Daddy's presents, a lovely meal out with friends, much hilarity on my part, and pain on Hubby's, due to the combination of Hubby's massive birthday hangover and Birdie's massive enthusiasm for it being Daddy's birthday, a very tasty brunch of buttermilk pancakes, bacon and maple syrup that did not really receive the reception it deserved from the rest of Team Collett, a much needed trip to the park for some sunshine and fresh air and a very tasty fish & chip supper at Kerbisher & Malt to round off proceedings.  The birthday boy seemed suitably impressed once his hangover had subsided and declared 36 to be not as bad as he expected.  Here's hoping. 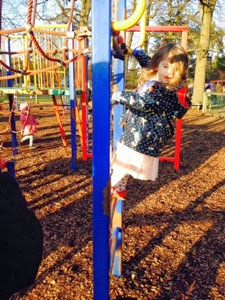 So, pictures wise, we have Birdie showing off her ever-growing climbing prowess in the park.  She's now mastered virtually every piece of equipment in Ealing that she's physically big enough to tackle (and a couple that she probably isn't). 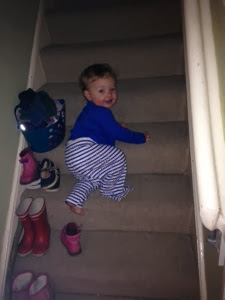 And not to be outdone on the climbing front, Mr Man go stuck in to climbing the stairs.  He's been able to for a while but has suddenly shown increased enthusiasm for them and shins up at top speed the moment the living room door is opened.
There is no hope for us.
Posted by Lyn Collett at 13:50