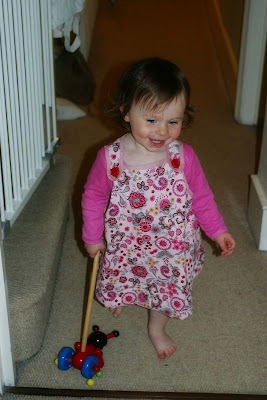 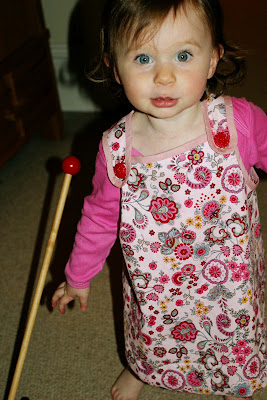 The pattern is "Watch the Birdie" from Making Baby's Clothes by Rob Merrett, but minus the applique.  This transforms it into the easiest sewing project in the whole world since it is just two pieces (or in my case 3 - I seamed the back so that I could squeeze this dress out of what was left of the 76 cm remnant I snaffled from DotsnStripes after I'd finished making the skirt for the dress she wore to the wedding that I keep promising to show you but failing to take pictures of), some bias binding and two buttons.  The fabric I know very little about: it was called Elisabet and I picked it up in late December along with a bunch of other remnants.  DotsnStripes have a particularly good remnants page I think and  I will be popping back over there regularly to pick up bits and bobs since I rarely need a full metre to make stuff for Baby Bird.  I'm really pleased with the fit - there's growing room but not so much that it looks ridiculous and the A-line is really flattering over her big fluffy washable nappies.  I will definitely be making more of these...
Posted by Lyn Collett at 13:38